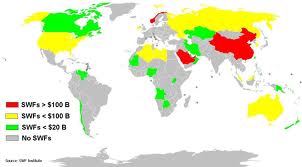 An hungry man cannot think of savings, because he is unable to meet his physiological needs nor is he guaranteed of the day after today. This makes savings the luxury of the privileged rich. It even makes no sense to the rich, when $1 “today” will worth less “tomorrow”.

This position sounds sensible at individual’s level (micro economics) but should a nation cease to save because of not earning enough or because the value of dollar will fall in the future?

Everyone sees the need to save  (poor or rich) as insurance against a sudden stop in future income streams. But the rate at which emerging markets – China, Malaysia, Russia, Brazil, UAE, Saudi Arabia, among others have been building up their reserves in the last decade has changed the topic from “Should a Nation Save” to “How Much Should a Nation Save” (Optimal Level of Reserve Accumulation)?

China established special reserve account in year 2007 with about $250Billion. But, 4 years after inception, China has accumulated about $3 Trillion in the State FX Investment Corporation Account. China is virtually maintaining a reserve almost 50% of her GDP.

Oil dollars from the Middle East are not only buying up Canary Wharf, Landmark buildings around the world or assembling titles-challenging football teams; they are building intimidating international reserves. UAE’s international reserve is approaching a trillion dollar mark.

Norway had about $324 Billion in the renowned Global Government Pension Fund in 2007 and in the 2010 report by, Norwegian Ministry of Finance on management of the fund, projection is to double the existing fund by year 2020.

Olivier and Romain reviewed existing propositions on how to determine “How Much Should a Nation Save”? They conducted some mathematical calibration using data from 34 countries between 1975 and 2003. Such propositions such as Greenspan-Guidotti Rule that the ratio of Reserve to Short Term Debt should be 1, to much more complex insurance model of taking decision under uncertain and imperfect information were presented.

Naijanomics then identified determinants of, how much a nation should save as:

(i) Size of the economy

What would have been expected of Naijanomics at this point is to utilise the models built by Olivier and Romain to help Nigeria determine what should be the optimal level of SWF the country should maintain. NAY! The primary decision to save or not to save has not even been resolved!

While countries such as Libya had 158% Reserve-to-GDP ratio, Hong Kong 121%, Saudi Arabia 109% and Singapore 103% as far back as 1990; Nigerian governors in year 2011 are taking arms against their citizens (with a pending court case) to stop the Federal government from maintaining a Sovereign Wealth Fund Account.

Nigerians saw a ray of hope when, President Jonathan on May 27, 2011 signed the National Sovereign Investment Authority Bill into law. The SWF was to replace the Excess Crude Account that Nigeria commenced in 2003. The fund was to take off with $1Billion deduction monthly from the EXCESS CRUDE REVENUE. (Excess in the sense that, it is an income above budgeted income).

How sad was it that, the state governors said they would not be able to pay November 2011 salary if the federal government should go ahead with the $1Billion seed capital?

We do not defend savings or SWF for the sake of savings. But because we do not consider the present utilisation of petro dollars as optimal in Nigeria, there is the need to have an escrow account in which the proceeds will be used for developmental projects only.

Botswana as far as 1966 had Pula Fund from Diamond, Uganda opened Poverty Action Fund as far back as 1998 from cash gotten from international aids, Venezuela had FIEM from oil proceeds since 1998 and our governors in 2011 are using the loophole in the 1999 constitution to stop SWF?

The governors raised the issue of transparency surrounding the management of the fund. This is a well-placed fear and we at Naijanomics nurse same fear. When one gazes into the way the Ghaddafis have managed the Libyan’s Oil Reserve Fund or the mystery behind the HH Sheikh Zayed Al Nahyans’ handling of ADIA, one is tempted to agree with the governors.

But instead of stopping the operations of the SWF on fear of probable non-transparency; we could have adopted the Norwegian model. So simple, but functional a model! Norway’s Ministry of Finance provides detailed guidelines while an independent finance manager (Norges Bank) handles all investment. The scheme is so transparent that everyone could see the basket of portfolio invested in. Besides the annual reports rendered to the public, quarterly management accounts are presented to the ministry.

Naijanomics is of the view that, the size of Nigerian economy and the propensity to grow is great. The oil proceed is considered volatile, but Nigeria is such an endowed country that, there are no immediate threats to Nigerian earning potentials.  However, the crisis-signal first showed its head in Argentina in 1989 but the financial crisis did not come until 2001, Mexico first showed signal in 1982 but the crisis came in 1995. Mismanagement in Greece had been accumulating years before 2011 and Nigeria cannot wait till the red flag is raised before our governors see the need, not only to save for raining days but to save towards developmental projects.